The first induction-heated Nozzle for your 3D-Printer 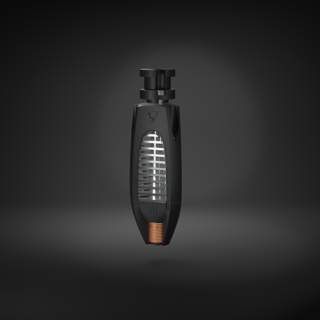 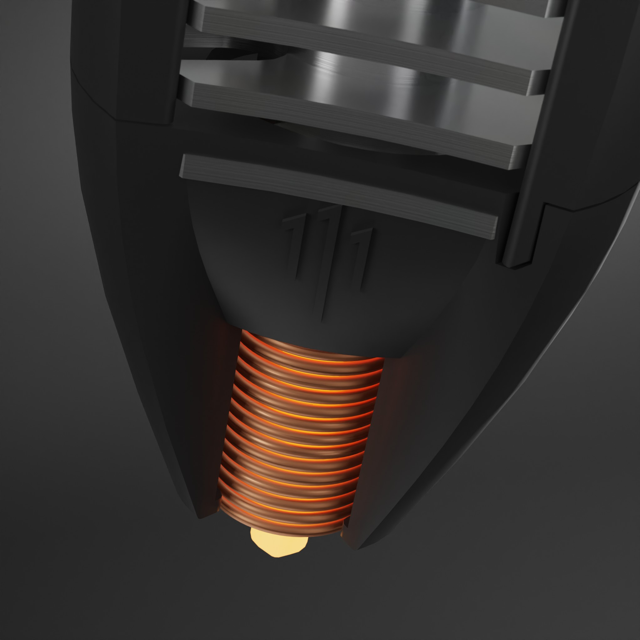 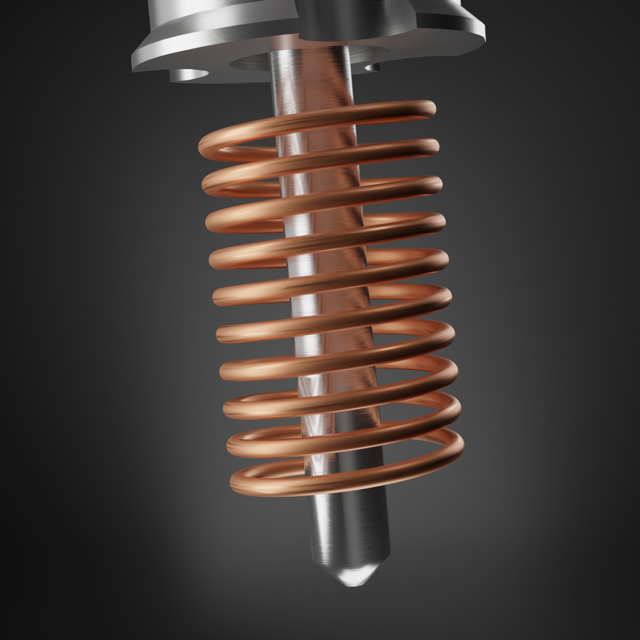 What makes the Plasmics INo 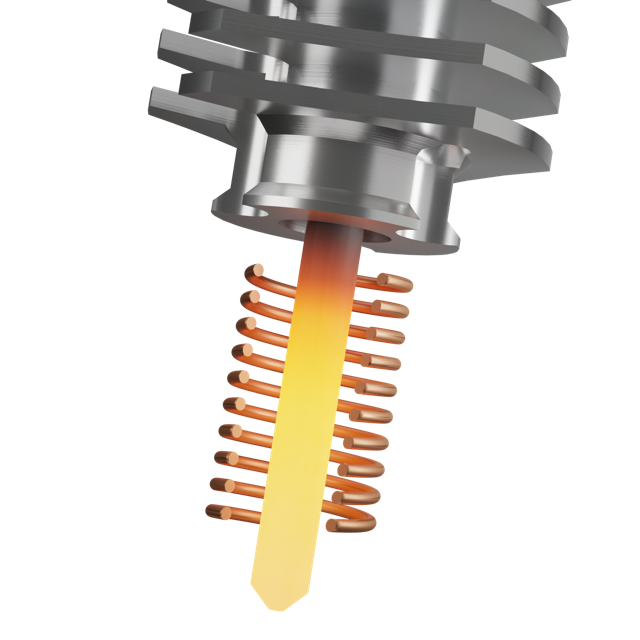 Using induction-heating in place of conventional resistance heating allows the INo Trident to heat up and cool down faster. Seems counter-intuitive but induction allows us to use significantly less mass and less mass cools down faster if not heated anymore. 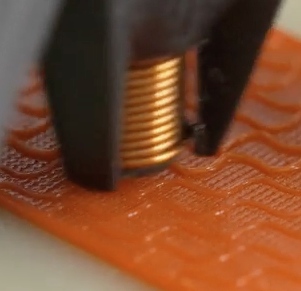 Waiting up to a minute for the nozzle to get to temperature introduces significant wait times to the printing process, especially on multi-material prints. With the INo Trident these wait-times can be reduced by up to 20x in certain cases (more on that in the future) 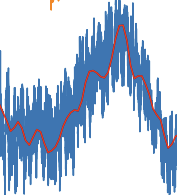 Less mass results in fluctuations in temperature getting propagated through the system faster and with shorter heat-times we correct more effectively and accurately. This yields in a more consistent extrusion providing improved print quality. 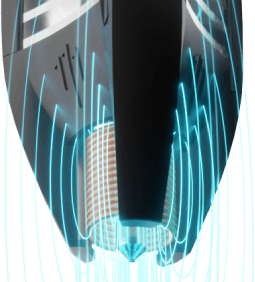 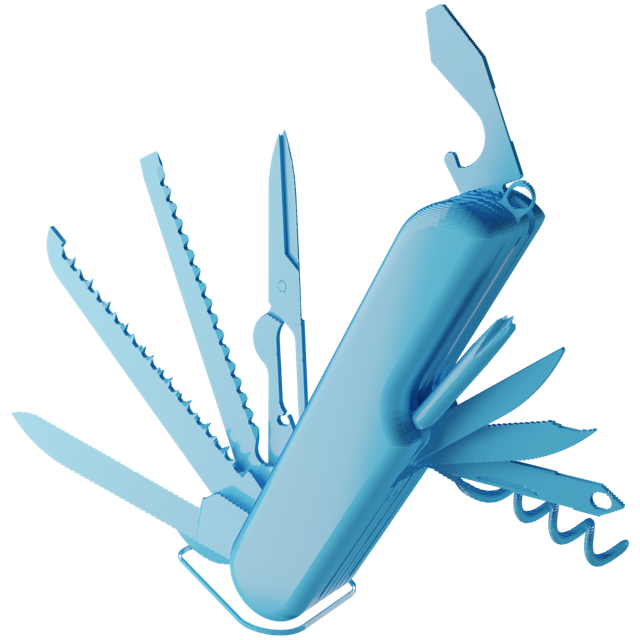 The INo Trident is compatible with (almost) every 3D-Printer and its own software seamlessly integrates with Klipper.
The INo Trident enables you to realize the full potential of your hardware! 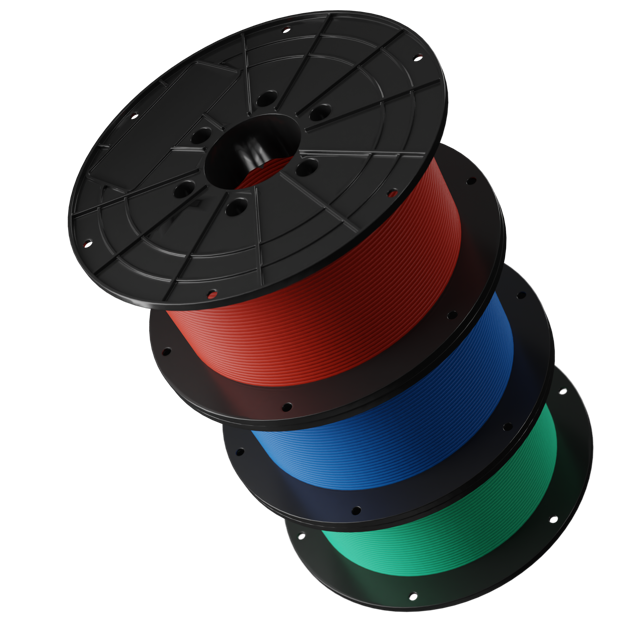 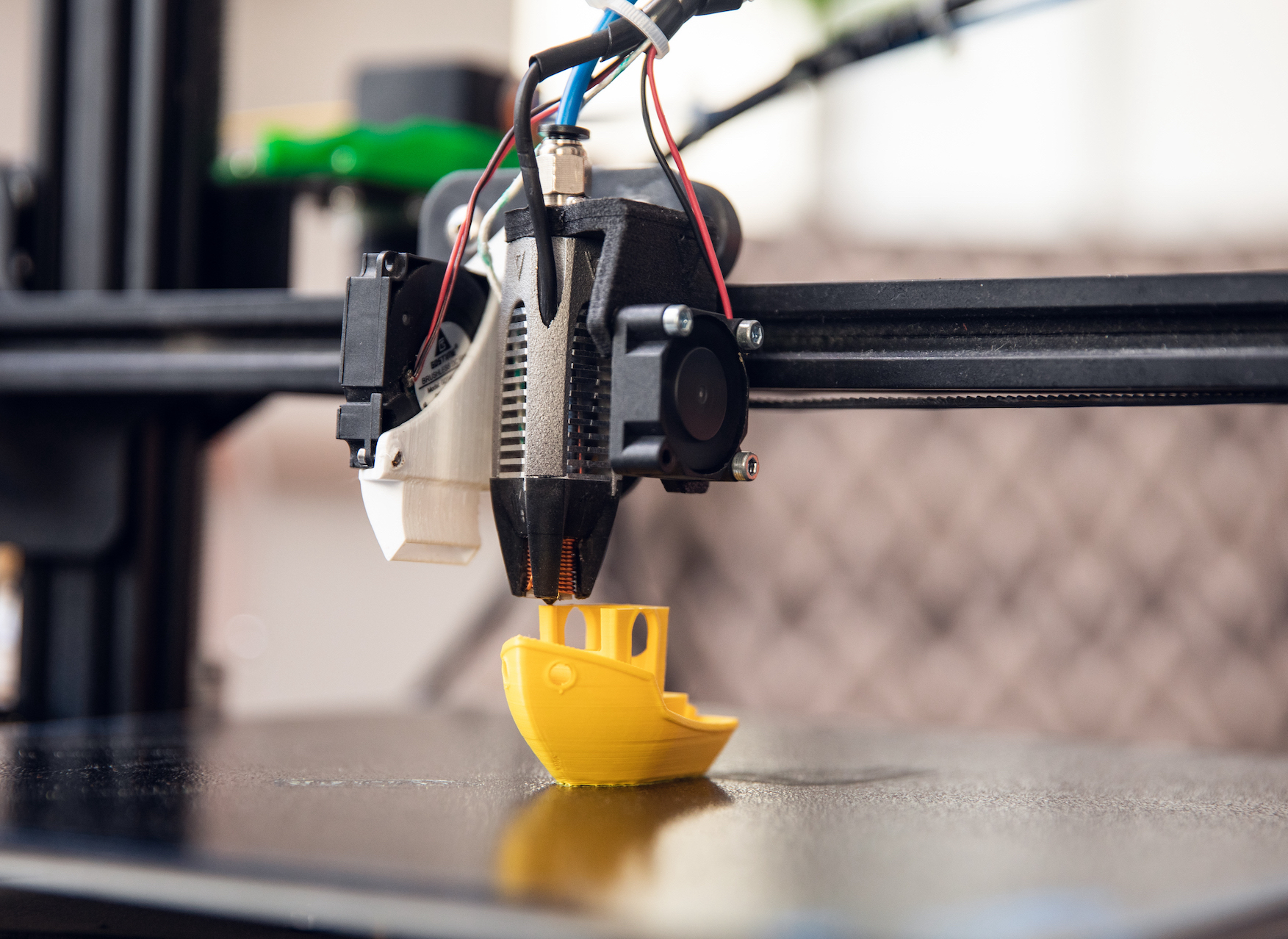 By using induction - essentially just modulated magnetic waves to induce a current that can only “go away” by turning itself into heat - we can control the power flux much more accurately. Heat the element up quicker without rapid unscheduled disassembly and cool it down faster because there is less energy stored in the system to dissipate away.

Using less mass gives us another integral benefit: more accurate measurement. Because there is less “buffer” between the filament and the temperature probe we know instantly how hot our filament is and with induction we can react faster without overshooting the temperature target. 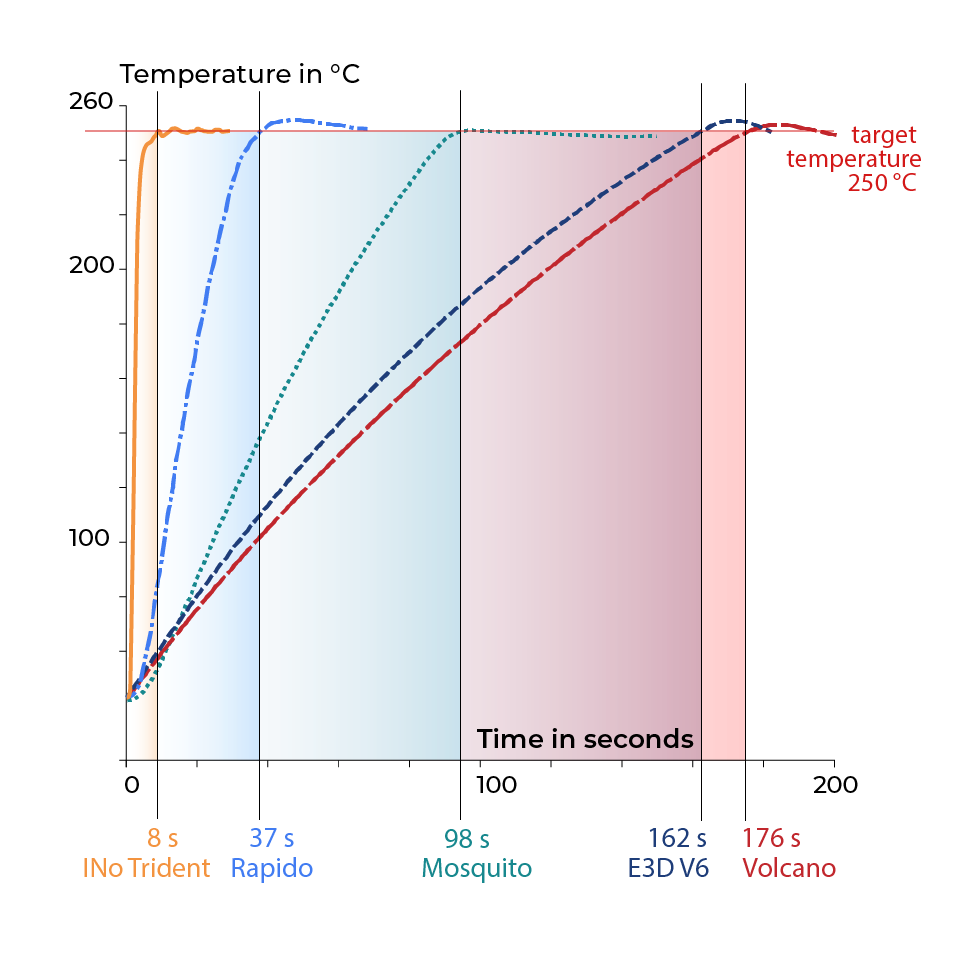 We measured the time it takes for different nozzles to heat up to 250°C (482°F) when installed in a common brand 3D Printer. The INo Trident reached stable 250°C after 8 seconds. The fastest alternative nozzle required 37 seconds to reach target temperature.

This core feature speeds up multi-material prints with frequent material changes by a factor of 5 in regular use cases and up to 20x in certain edgecases. 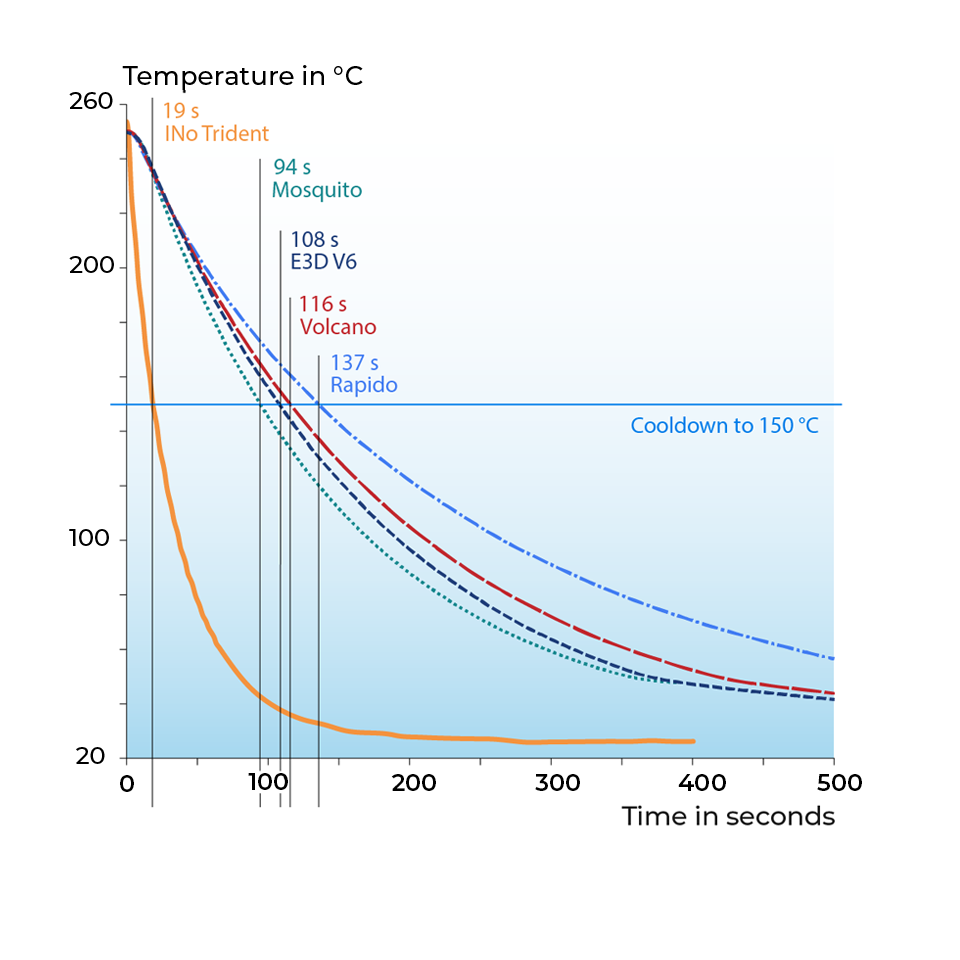 Because Induction offers a much higher level of control over the heating process we can not only accelerate the heat-up but also the cooldown. It took the INo Trident 19 seconds to drop to 150°C (302°F) compared to the 94 seconds for the quickest alternative nozzle.
‍
The heating element within the INo Trident needs less mass for safe operation - thus it cools down faster because less energy needs to be dissipated. Additionally the more accurate temperature probe prevents a temperature overshoot.

The cooldown was measured without filament flow and without a cooling fan. Even in this worst case scenario the INo Trident performed markedly better than comparable nozzles. In a real print this results in a rapid cooldown and significantly less oozing.

Are you interested in learning more about INo Trident or any other Plasmics product? Should you have any questions or queries, please contact us and our professional team will get back to you as soon as possible.

● Fits on all common 3D-Printers

● Developed in Vienna & Built in Europe

Stay up-to-date with all the latest news and developments at Plasmics, as well as updates on INo Trident and DeltaS. By signing up you agree to receive emails from Plasmics GmbH. You can unsubscribe at any time by clicking the link in the footer of our E-mails
Thank you! Please check you inbox to verify your email-address and we'll will be in touch with you within the next few minutes
Oops! Something went wrong while submitting the form.

Plasmics was founded in 2018 and has worked almost exclusively in stealth mode since then. Plasmics singular focus is developing the worlds most sophisticated and easy to use 3D printing solution and the INo Trident is the first publicly available piece of our vision.

We will enable the effortlesss manufacturing of various medical devices such as orthoses, protheses, casts, corsets. Our system will help people to enjoy a better quality life with perfectly fitted prosthesis' manufactured within a few hours instead of weeks.